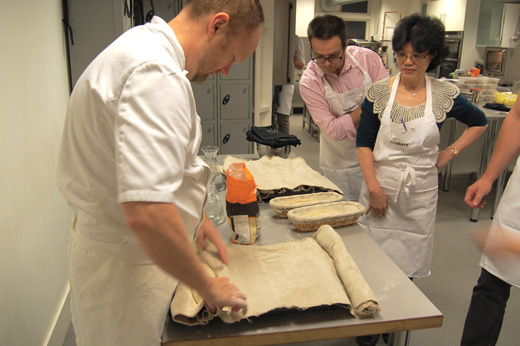 Last Saturday I attended Dan Lepard’s workshop on sourdough, held in the centrally located kitchen of the Cookery School in London.  It’s one of my favourite areas of London not because I know it so well having worked around there for years in a previous life but because it’s a stone’s throw away from John Lewis, and a cook can always find an excuse to pop into John Lewis.

My workshop day started with walking down the stairs where the Cookery School is and being greeted by the scene below, in a very relaxed atmosphere Dan chatting to some students who arrived early.

David Whitehouse who organises Dan’s courses greeted me, followed by Dan, I then introduced myself to other students while being offered coffees, teas and snacks warm out of the oven.  A good start to the day, not often I start my baking day with someone else cooking for me. 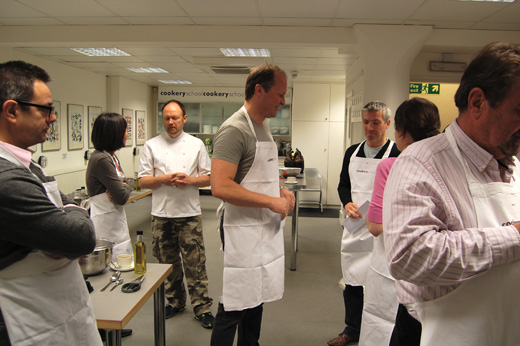 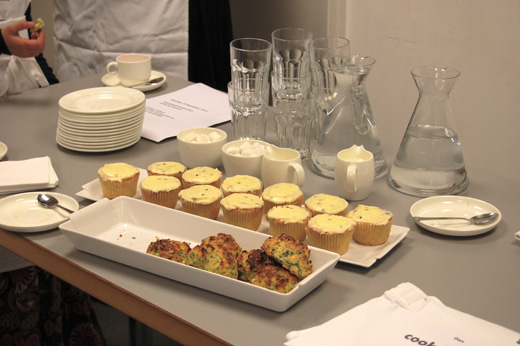 This class has a peak at Dan’s latest book, Short & Sweet edited by David.  Can be pre-ordered. 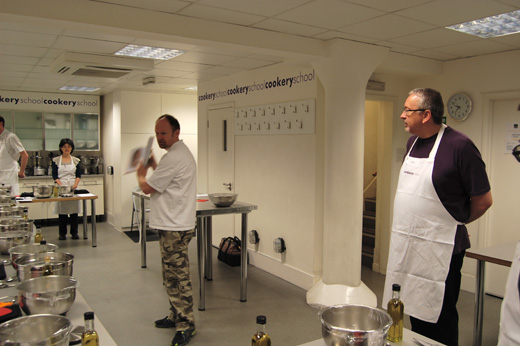 The class gets off to a flying start with lots of meaty information on Dan’s method with sourdough. 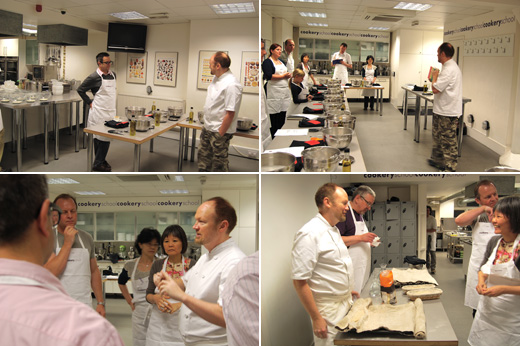 The multi-talented David is not just there to make sure the day runs smoothly, he also lends some practical help. 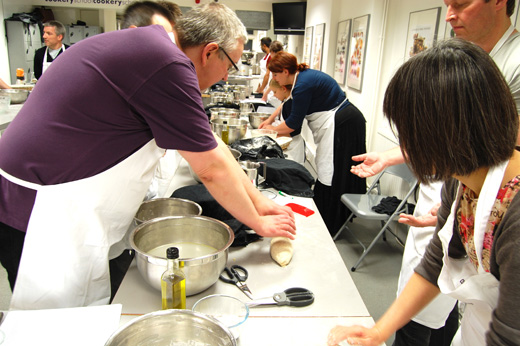 You’re never too young to learn sourdough.  Vanessa Kimbell’s oldest daughter takes to bread making as a duckling takes to water.  They made a fabulous mother and daughter team. 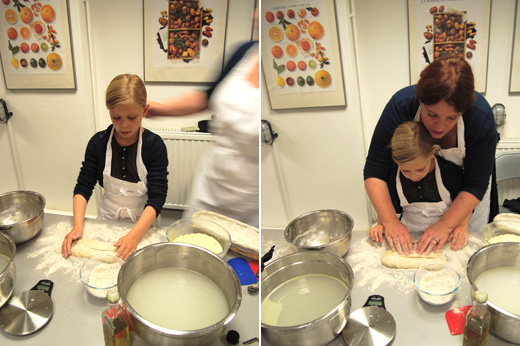 It was getting close to lunch, our stomachs were ready. 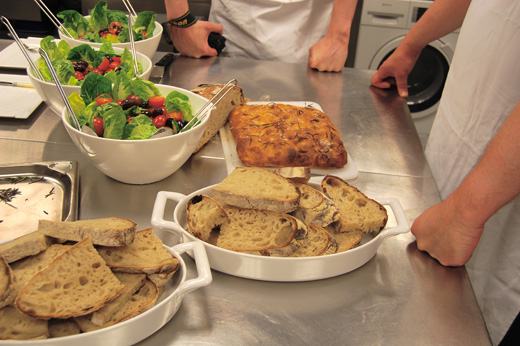 But we still had to put our sourdough babies to rise…work still to be done. 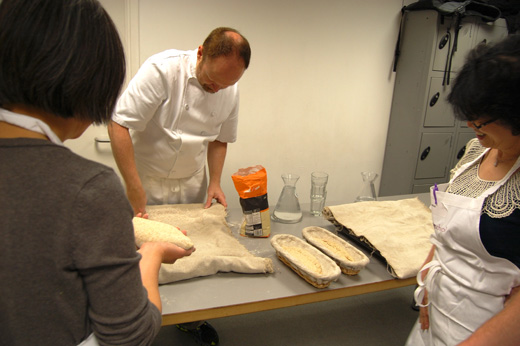 And then lunch came…mmm…rather civilised lunch…tablecloth…oh my Gran would’ve approved. The Cookery School staff were lovely and I watched them spend all day on their feet making our day comfortable, a hard working duet. 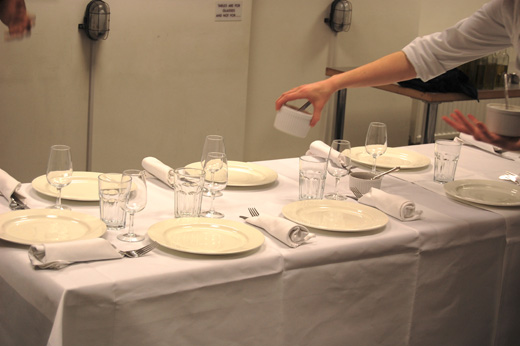 After lunch there was plenty of opportunity to discuss more bread shaping and method, the theory as well as practice of shaping.

I have no idea what Dan was discussing here, but he appears to be doing a Puppet Show for us, doesn’t he?  He’s saying, “…and this one on my right hand is Mr Bull…Mr Bull say hello to Ruff the Dog…”  ok I’m getting a little carried away here.

Dan also went through the steps of making your own starter, showing each stage and then at the end in the goody bag everyone could take home their own starter to care for. 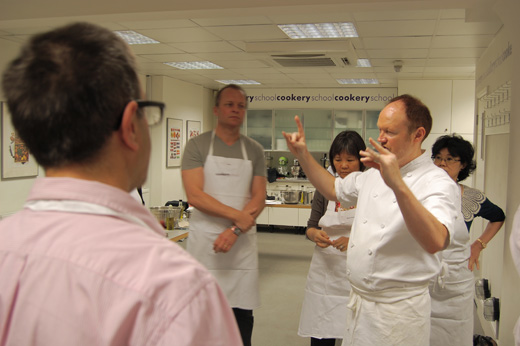 There are many bread workshops – why do one with Dan?

Dan is a baker who understands the theory of bread, the science behind it, and if you’re a more experienced baker he will give you plenty of nerdy stuff for you to fill your boots.  If on the other hand you’re not such an experienced baker he makes the information accessible and explain it in a plain language that you won’t feel as if you’ve walked into a university lecture.

You’ll never hear Dan come out with rubbish I’ve heard some bakers say, like “..you must fold the dough to introduce it to itself ”  what?  or  “..you should handle the dough because its magic!”  ahemm….No…you won’t get such dribble from him. 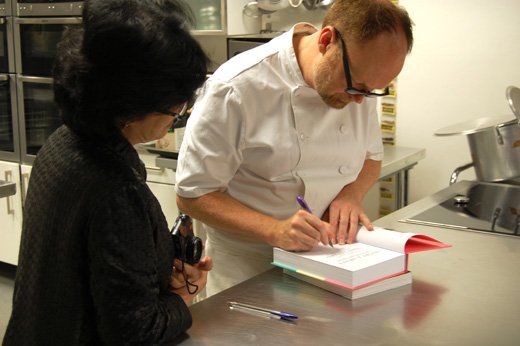 Dan will start you on the understanding of water awaking the proteins in flour, glutenin and gliadin, talk of the importance of lactic acid bacteria in a sourdough starter, the milling process of flour, obtaining the different characteristics in bread and much more.  He will talk of  his experience and his discovery of the folding method and show you for yourself how dough changes given the right hydration, folds and rests.

Dan is a master baker because he is skilled enough to do what he does excellently and  because he truly understands why.  I’ve had my head in text books now for a few months and understand the theory really well, so well I know when there’s a sense of nonsense spoken.   Here Dan will talk facts to you, not half baked ideas or misinterpreted theory, not even a hint of rubbish of which exists so much in the bread world. 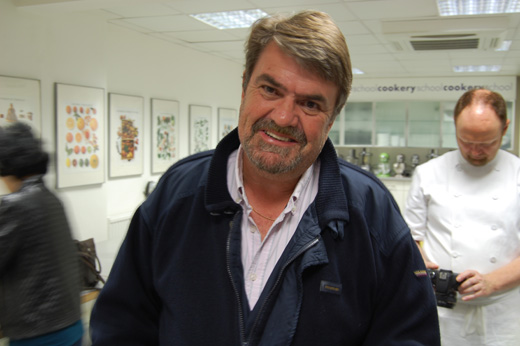 The story of Peter above was that he had never baked sourdough in his life and wanted to learn, when I spoke to him at the end he was on a dough high, having seen how easy it was to make, how he could fit around his day and was now eager to reproduce it at home.  I don’t think Dan could ask for more than that.

If I’ve made Dan sound so far too serious and an anorak then I must make sure I describe what he’s like in person because he is very far away from being those things.  He is warm and friendly and smiley and relaxed.  A friend of mine recently said, he’s a good story teller.  He will make you feel at ease.  He’s approachable and interested and a breath of fresh air in this industry. 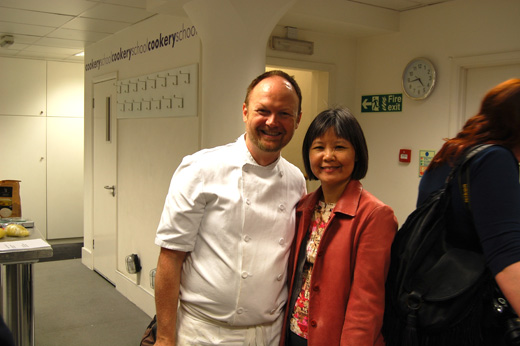 Just in case you’ve missed the details of the school in the link above here it is again: Cookery School, Little Portland Street, London. 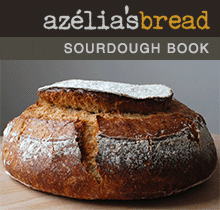