Ice Cream or Sorbet Too Firm in the Freezer?

I’ve been working on this through the holidays, reading up on the problem of homemade ice cream or sorbet becoming rock hard in the freezer.  I don’t know what you were doing the day after Christmas but I had the afternoon off and spent it enthusiastically reading up on ice-cream and corn syrup, researching information on liquid glucose, and going through all of my books looking at ice cream and sorbet recipes.

Some ice creams or sorbets are worse than others at becoming rock hard once stored in the home freezer.  Last Spring when making Rhubarb & Raspberry Sorbet (the photo above), Rhubarb Ice-cream (photo below) and Chocolate Ice-cream I found once stored in the freezer they became too hard to scoop out and – here’s where my biggest problem is – the texture suffered. It was not the lush and velvety ice-cream in your mouth as when freshly made.

Texture In Your Mouth

The sensation which makes ice-cream pleasurable to eat is the smooth texture.  However good the flavour of ice-cream might be, for me it’s ruined if it doesn’t have a melt-in-your-mouth silken texture. I don’t like feeling icicles on my tongue.  McGee writes that ice-cream is, “…the tantalizing transition from solidity to fluidity”.

What size the ice-crystals become when making ice-cream will determine how smooth the texture will be, the smaller the smoother.

Another factor when churning the cream or custard is the air incorporated into the mixture, air will give it volume, add lightness but also helping with the scooping.  According to McGee you can have a mixture containing as much as half volume and half air, producing a fluffy texture.  I can not see how this is possible in our simple ice-cream machines because the bowl with the rotating blade is so small and with it being nearly full of mixture I’m not maximizing the potential for incorporating air.

A recipe that contains a high percentage of fat will give you a smoother result but not necessarily a lighter one  and you want to find a balance between smooth texture and a light feel.

There is lots of detail in McGee’s entry on the structure of ice-cream.

Parfaits are an excellent way of making good ice-cream without the need for an ice-cream maker.  Egg yolks contain proteins and emulsifiers that help keep ice crystals small, making texture smooth even with a low fat and high water recipe.

Something else happens with traditional parfaits recipes, it uses a sugar syrup (sugar dissolved in water until thick) whisked into the egg yolks.  The action of whisking hot syrup into the egg yolks is incorporating lots of air while setting the eggs, which will be stabilised by the egg protein, emulsifiers and fat globules.

The other ingredient found often in parfaits is whipping the cream which is then folded into the egg mixture, again good way of incorporating air, plus fat molecules don’t attract large icicles like water molecules.

A suggestion of McGee is, cooking the mixture “..improves body and smoothness by denaturing the whey proteins, minimize size of crystals”.

Watching Heston’s approach to making the smoothest ice-cream possible is to cool the mixture in liquid nitrogen…ok so not the most convenient way for me.   The fastest you cool the mixture whilst stirring according to Heston and McGee the smaller the ice crystals formed.  Large formed ice crystals are made when ice crystals collide together and form large lumps giving you a grainy texture.

Once your ice-cream mixture is semi frozen by the ice-cream machine then storing to harden the mixture further in the freezer can also become problematic by creating large ice crystals.

When storing your ice-cream in the freezer the aim is to freeze it as quickly as possible to avoid further ice crystals forming while freezing, creating a coarser texture.

When cooling ice-cream it’s best to put it into shallow containers or divide mixture into more than one, a wider surface area speeds up the cooling process.

You can see from the photos that I use a very basic ice-cream machine where you put the bowl part into the freezer over-night.  It does not freeze the ice-cream sufficiently, it gets it to the semi-frozen stage, the mixture is then put in the freezer for a few hours when it has harden enough but still maintain some softness.

Hard Ice-Cream In Your Freezer

My expensive small tubs of bought good quality ice-cream made with whole milk, cream and free-range eggs, they also harden when stored for a while in my harsh Siberian-like freezer.   I deduce supermarket/commercial freezers are kept at warmer temperature than my freezer at home.

I’ve read people’s advice to prevent your ice-cream becoming rock hard to store it nearer the door or on the door itself of the freezer, but I can’t help thinking this will destroy it’s texture in the long run.  As you open the freezer door to take things out you have a blast of hot air entering the freezer, your ice-cream being close to this will have a flux of temperature around it, which I think will add to creating larger icicles.

Some homemade ice-cream are particularly bad and stay hard for a long while and eventually when you can scoop the texture is hard and icy…unpleasant.  This is a particular problem with ice-creams such as strawberry or the rhubarb or chocolate as they contain a high percentage of water.

One answer to this is to use alcohol, but it’s not always appropriate if you’re trying to avoid it.

If you replace some of the sugar in the recipe with liquid glucose or corn syrup it will maintain the mixture soft, and within few minutes of being out of the freezer it will be easy to scoop out.

Read about using inverted sugar in my post on:  Liquid Glucose – the answer to the perfect ice-cream and more.

Read about creating the perfect ice-cream using inverted sugar and jelly together to create the ultimate smooth texture ice-cream straight from the freezer in my post: How to make super smooth ice-cream or sorbet.

Within 2 minutes of putting my chocolate ice-cream made with some liquid glucose into a serving glass it was at that lovely stage of soft and melting-in-your-mouth texture.

Making Ice-cream Without a Machine

If you don’t have an ice-cream maker it’s possible to make ice-cream by taking the mixture out of the freezer every 2-3 hours and whisk to break up the ice-crystals, put it back in the freezer and repeat the process again at least 3 times, but the more times you do it the smoother the texture. 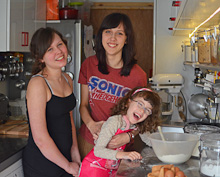